The ECP committee wants to recognize our Early Career Psychologists who are doing great things all across the country and the world in support of military psychology. This quarter we recognize our professional development grant awardees.

Think you know someone who should be highlighted? Email us ​here

Dr. Ryan Hess earned his Ph.D. in Counseling Psychology from Ball State University and completed his psychology internship at the Los Angeles VA. He serves as the PTSD/SUD Specialist at VA Northern Indiana Health Care System and works in the residential drug and alcohol unit and also works in the outpatient Suboxone clinic. He is a national Trainer and Consultant for VA for Cognitive Behavioral Therapy for Substance Use Disorder and is the lead clinical supervisor for practicum students at his hospital. Ryan has been very active with Division 19 since 2013 and has served as a Campus Representative, has received 3 travel scholarships, was honored with 1 research scholarship, and currently is a member of the Continuing Education Committee. His research interests include PTSD, SUD, TBI, and partner support. 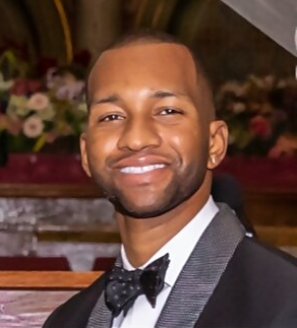 Dr. Ryan C. Warner is a licensed psychologist, researcher, speaker, and consultant. He is passionate about leadership, diversity, social justice advocacy, and military psychology. His research interests involve PTSD and substance use, clinical health psychology, and the analysis of social forces affecting racial/ethnic populations. As the Director of Psychological Health and Staff Psychologist at Kirtland Air Force Base, Dr. Warner assists with promoting the mental health and well-being for over 3.6k military service personnel and their family members. Dr. Warner also provides consultation services to enhance organizational effectiveness. 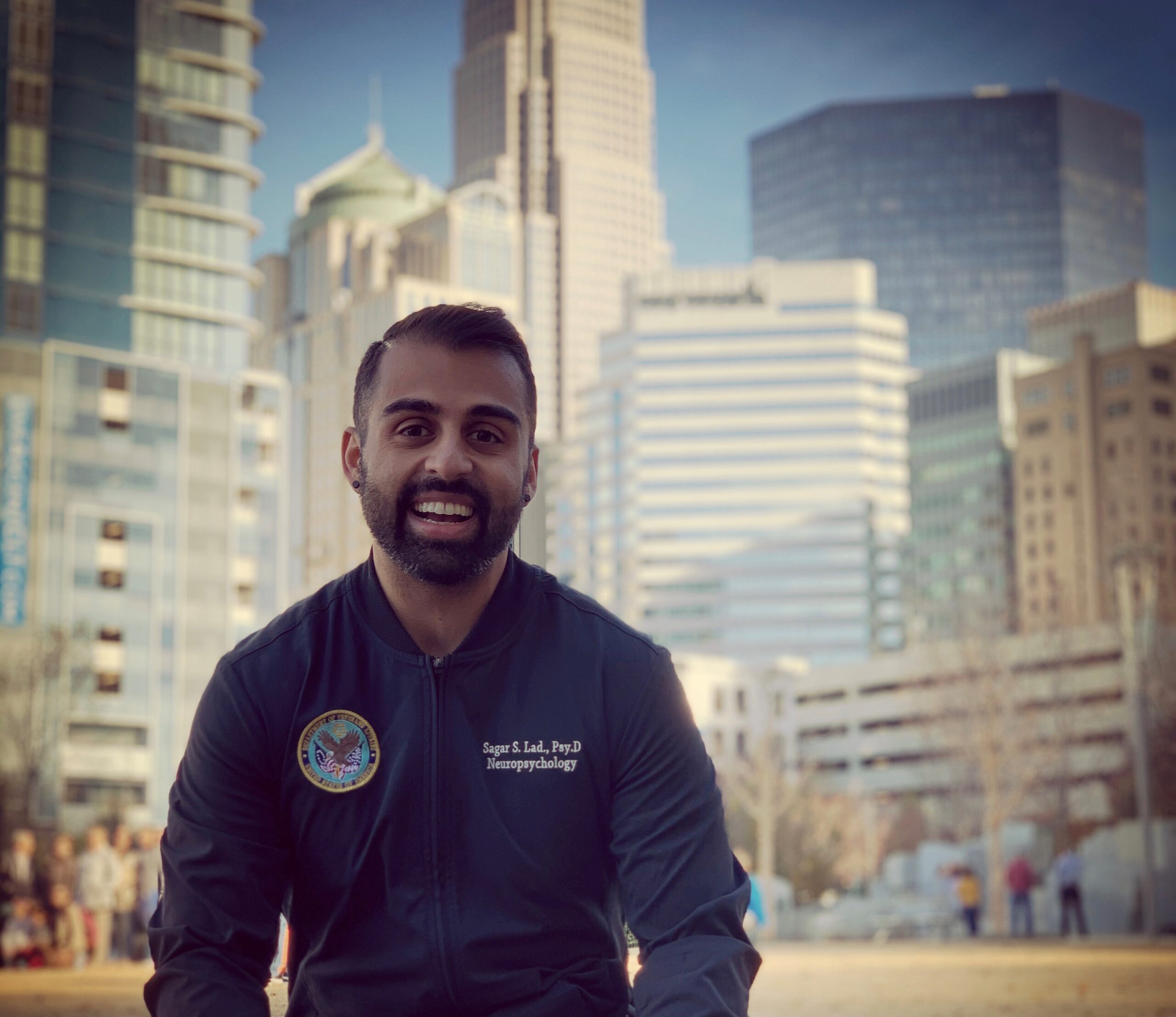 Sagar Lad, Psy.D., CSP is an Advanced Psychology Fellow-Neuropsychology Specialty at the W.G. (Bill) Hefner VA Healthcare System within the Mid-Atlantic VISN 6 MIRECC on Post Deployment Mental Health in Salisbury, NC. He also is an Adjunct Faculty in Neurology at Wake Forest School of Medicine and a Board Certified Psychometrist. He received his MA and PsyD in Clinical Psychology from William James College in Newton, MA and completed his clinical pre-doctoral internship at the Finger Lakes VA Healthcare System in Canandaigua, NY. Presently, he has worked on projects focused on sleep disorders, pain interference, and post-deployment mental health of OEF/OIF Veterans. Additionally, he is collaborating with neuropsychologist in addressing microaggressions and microinsults experienced by pre-doctoral-to-late career minority neuropsychologists. 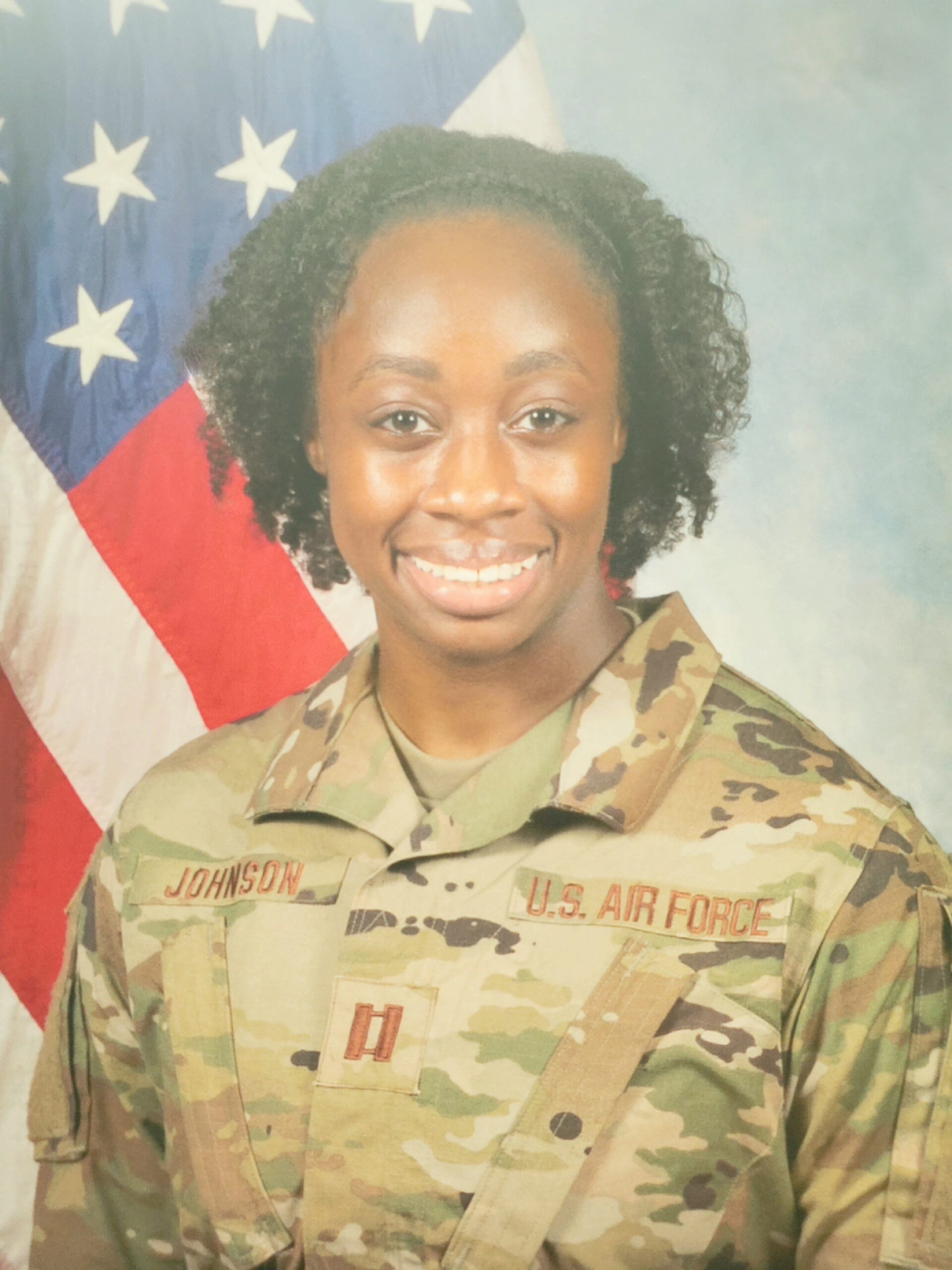 Captain Lauren B. Johnson is currently a clinical psychology resident at Malcolm Grow Medical Clinics and Surgery Center at Joint Base Andrews, Maryland. Capt Johnson is a graduate of Vanderbilt University (B.A., Psychology, Sociology, Philosophy) and Harvard University (M.Ed., Human Development and Psychology). She will complete her Ph.D. in Clinical Psychology at Drexel University in June 2021. Capt Johnson was selected for the United States Air Force Health Professions Scholarship Program and commissioned into the U.S. Air Force Reserves in May 2018, prior to entering active duty in June 2020. Her professional interests include moral injury, suicidology, Lifestyle & Performance Medicine, and operational psychology. 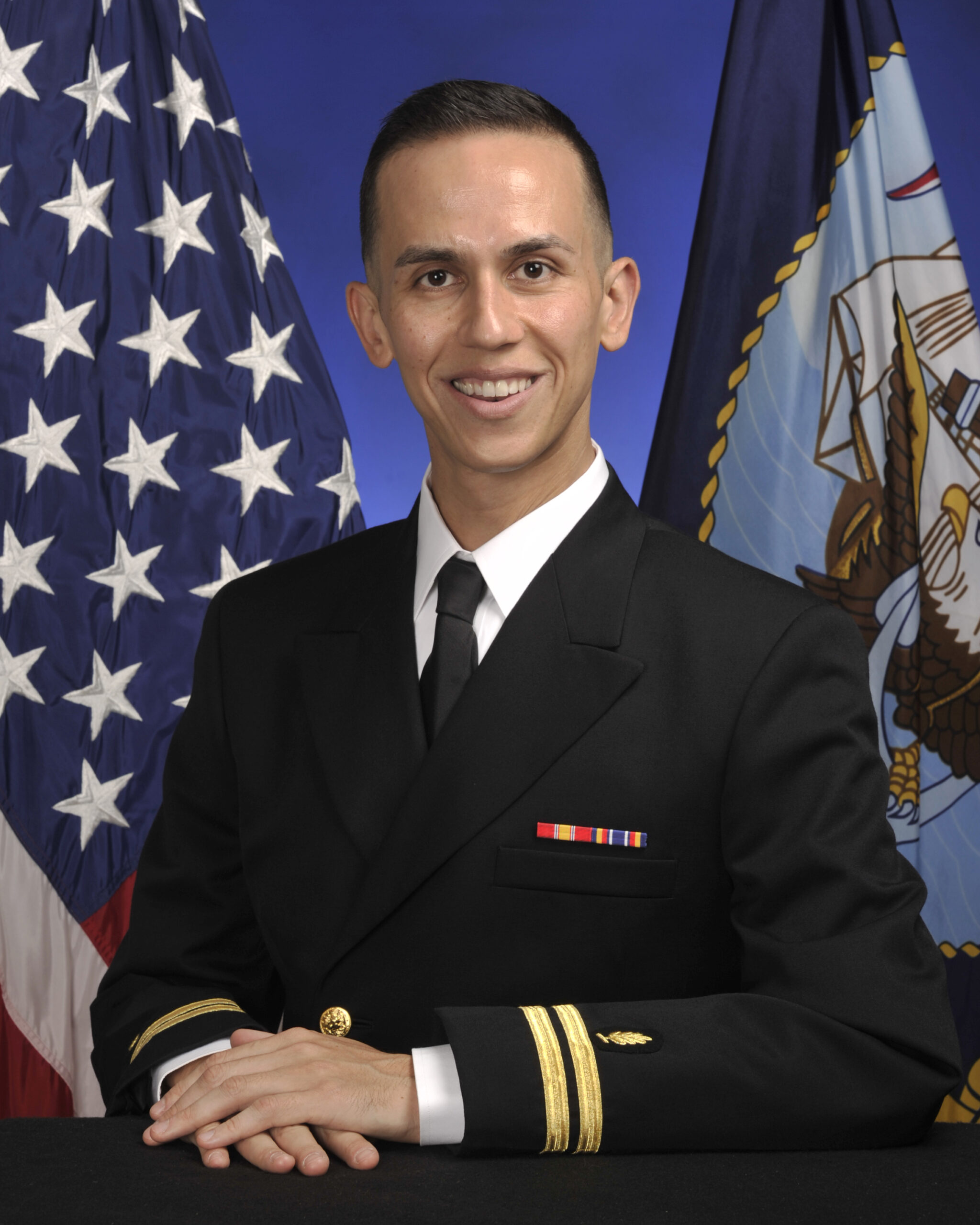 Lieutenant Nicholas Grant is an early career clinical psychologist serving in the U.S. Navy. Currently Dr. Grant is stationed at Naval Medical Center San Diego (NMCSD) where he serves as the Division Officer of the Mental Health Unit at the Marine Corps Recruit Depot San Diego. In addition to this role, he serves as co-chair for the Naval Medical Forces Pacific Transgender Care Team, chair of the NMCSD Director of Mental Health Grand Rounds Committee, and faculty in the NMSD APA-approved Clinical Psychology Internship Program. Dr. Grant was a member of the inaugural cohort of the Society Leadership Program where he completed a capstone project focused on building the relationship between Division 19 and Division 44. The project included conducting interviews and exploring the collaboration between the divisions around the repeal of Don’t Ask, Don’t Tell, co-hosting a conversation hour at the 2019 APA Convention via the Division 44 Public Policy Committee around collaborative opportunities to oppose the ban on transgender military service, and most recently reunited the divisions to develop a joint statement supporting the repeal of the ban. Dr. Grant is also a recipient of a 2020 Division 19 ECP Professional Development Grant aimed at supporting his certification in Emotion Focused Therapy (EFT) with the goal of providing the highest quality evidence-based care to his patients and dissemination of EFT to the trainees he supports.

Dr. Grant obtained his Ph.D. in Clinical Psychology in 2015 from Palo Alto University, where he worked as a research assistant with the Center for LGBTQ Evidence-based Applied Research (CLEAR). He is also an alumnus of the LGBT Health Policy & Practice Graduate Certificate Program at The George Washington University. He completed his pre-doctoral internship in Behavioral Medicine at Tulane University’s School of Medicine and a postdoctoral fellowship focused on LGBT Mental Health in the Clinical Psychology Postdoctoral Residency Program at the San Diego VA. Following his residency, Dr. Grant served as an APA Congressional Fellow in the Office of U.S. Senator Kirsten Gillibrand (D-NY) where he worked on the Senator’s Military/Veterans, Healthcare and LGBTQ legislative portfolios. He was named an APA William A. Bailey Health and Behavior Fellow, a specialty designation APA awarded to him based on his extensive background in LGBTQ clinical practice, research and community engagement. In 2018, Dr. Grant was awarded the Distinguished Alumni Award from Palo Alto University as well as an APA Presidential Citation as a Citizen Psychologist for his dedicated efforts using psychology to improve the lives of LGBTQ people. 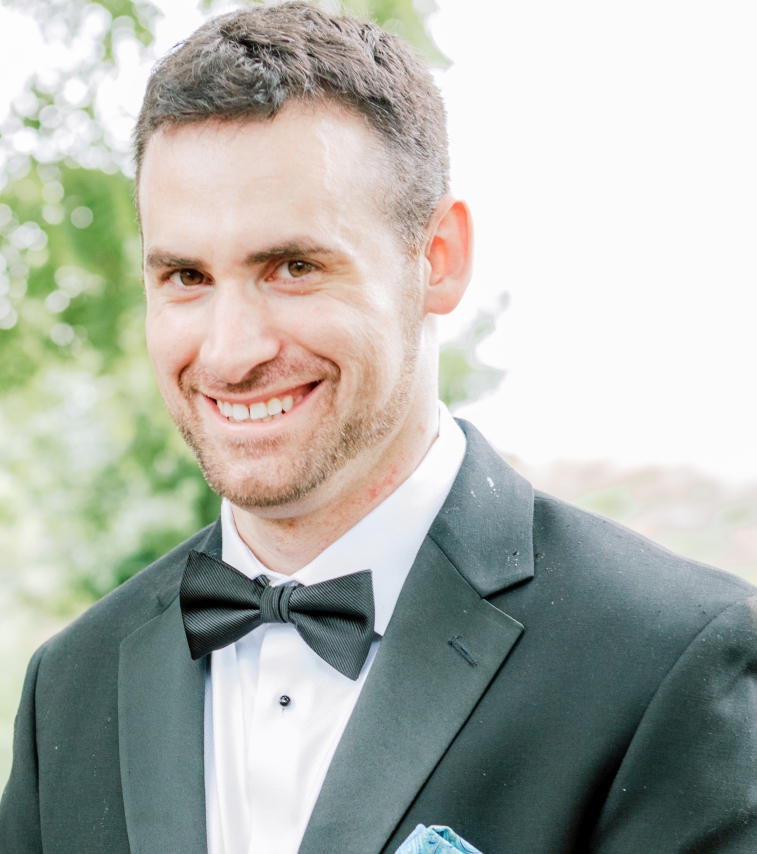 Joshua Camins earned his Ph.D. in clinical psychology from Sam Houston State University. Dr. Camins has been providing clinical services in a variety of settings for the past 8 years. He completed his predoctoral internship at the Memphis VA Medical Center where he worked with psychological trauma in both an outpatient and residential setting. Dr. Camins’ research broadly focuses on the intersection of military and forensic psychology. Dr. Camins also completed a postdoctoral fellow in forensic psychology at Sand Ridge Secure Treatment Center and Mendota Mental Health Institute in Wisconsin. In that role, Dr. Camins completed sexually violent person (SVP), competence to stand trial, and violence risk assessments with a range of forensic patients. Dr. Camins currently works as a licensed psychologist with Carle Foundation Hospital, where he offers evidence-based treatments to a range of clients.

Dr. Camins has been a member of Division 19 since 2015. He is a recipient of multiple student travel awards and was a member of the inaugural Division SLP class. His project examined the composition of Division 19 Membership and provided recommendations to better serve the needs of members. Dr. Camins hopes to work with division leadership to further develop aspects of forensic military psychology in the division.